What happens when Marcus attempts to leave his wife for his mistress only to discover that his wife is not the person he thought she was. 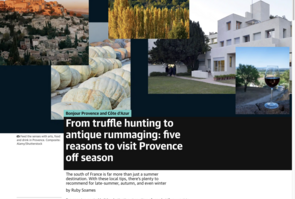 ​The one and only short story published by the Times Educational supplement.

Set in the future when every day lives will be controlled by OFSTED-type inspectors judging and grading us on everything we do. 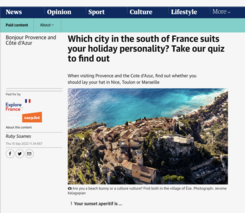 'On the Other Side'

An article about my experience being on the other side of the table at parents' evening.

'The Griffin' is short listed.

Marlena remembers the day she discovered what happened to her missing mother. 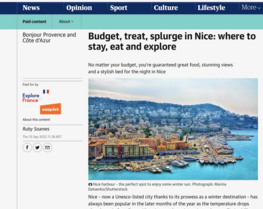 BUDGET, TREAT, SPLURGE IN NICE: WHERE TO STAY, EAT AND EXPLORE

A dystopia story about a time when the young have the right to bump off their older relatives for in order to free-up cash.

​​
The editor writes: "It is a rich, colourful portrayal of how the other side live and how the other side royally fuck up their entitled lives. It was so detailed with the litany of nannies and au pairs passing through the children’s lives, often via their father’s bed, only marked by the nicknames Marlena and Hugo give them. When Marlena finally discovers the reason behind her mother’s disappearance, it is a subtle yet disturbing reminder of the impact of irresponsible parents, domestic abuse and utter selfishness. How anyone survives such an upbringing is just astonishing."

WHICH SOUTH OF FRANCE CITY SUITS YOUR HOLIDAY PERSONALITY? TAKE THIS QUIZ TO FIND OUT

FROM TRUFFLE HUNTING TO ANTIQUE RUMMAGING, 5 REASONS TO VISIT PROVENCE OFF SEASON